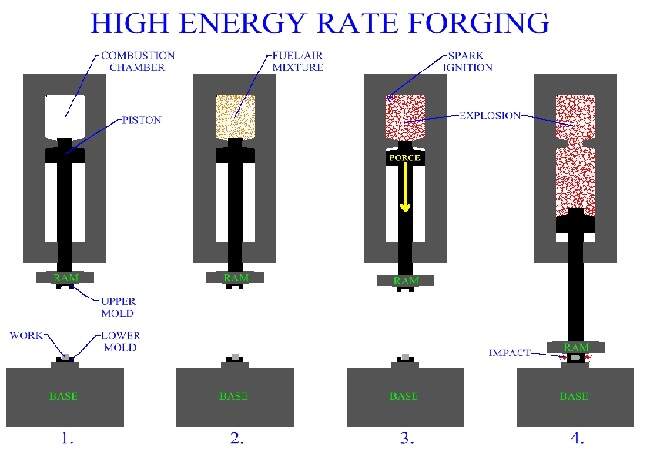 What is High Energy Rate Forming ?

HERF (high energy rate forming) is the process of moulding materials by rapidly delivering energy to them for brief periods of time. There are several HERF methods, most of which are reliant on the energy source used to achieve high velocities.

In these forming processes large amount of energy is applied for a very short interval of time.

Although most presses do not run at high speeds, forging is done at high impact rates on some occasions. This is different from hammer forging because the blows are not repeated.

A major contribution to conventional forging operations is their high impact velocity which is 2 to 10 times larger than conventional velocities. In the conventional practice, the mass term has been made ever larger to obtain heavier forging forces, whereas in high-velocity forging the velocity term has been increased.

This gas drives the ram which is pressed against a seal ring at the top. Enough high-pressure gas is admitted to the area inside the seal ring to dislodge the piston. The high-pressure cylinder then acts over the whole piston area and drives the ram down at a high velocity ranging between 9 and 20 m/s. Most parts are formed with a single blow. gas in th

At these high velocities, the metal flows plastically since the metal can be worked more at high temperatures. This is because the forging does not give metal time to cool much in contact with die and the heat does not have time to escape. Thus deep, straight-sided parts can be made zero or small draft, which means much less metal to be machines off later. Much thinner walls can be forged.

Sections as thin as 3.8 mm have been made in experiments. Tolerances of +0.25 mm and sometimes less have been achieved. Materials forged successfully by this method include low-alloy steels, aluminium, and nickel steels.

High-energy-rate forming machines are listed with capacities of 2,850 to 3,43,520 kgfm (28,500 to 34,35,200J of energy). This is adjustable over a wide range on each machine. It is important to note that they are actually less expensive, and they do not require as heavy foundations as other forgers. But proper lubrication is very important to achieving good die life.

The principal advantages of HERF are as follows:

1. Parts can be formed that cannot be formed by conventional methods.

2. Exotic metals, which do not readily lend themselves to conventional forming processes, may be formed over a wide range of sizes and configurations.

3. The method is excellent for re-strike operations.

4. Spring back after forming is reduced to a minimum.

6. Variations from part to part are held to a minimum.

What is Hot Working ? Methods & Processes