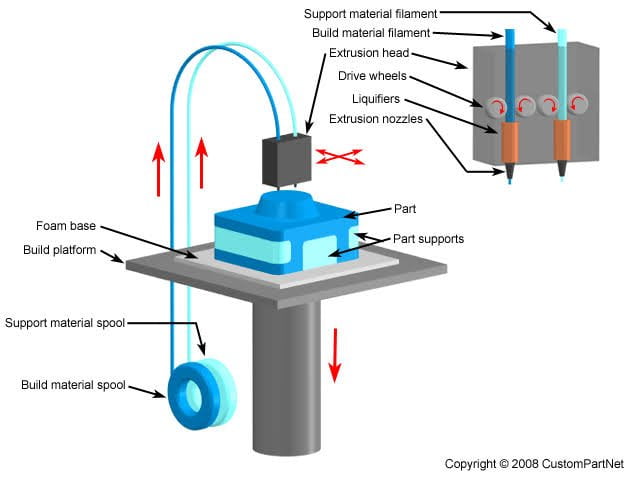 What is Rapid Prototyping ?

Rapid prototyping (RP ) is the most common name given to a host of related technologies that are used to fabricate physical objects directly from CAD data sources. These methods are unique in that they add and bond materials in layers to form objects.

Such systems are also known by the names of additive fabrication, three dimensional printing, solid freeform fabrication (SFF ) and layered manufacturing. Today’s additive technologies offer advantages in many applications compared to classical subtractive fabrication methods such as milling or turning.

The capabilities of Rapid Prototyping techniques can be listed as shown below :

Although several rapid prototyping techniques exist, all employ the same basic five-step process. Figure below shows the conceptual representation of a RP technique. The steps are listed here under:

1. Create a CAD model of the design

First, the object to the built is modeled using a Computer-Aided Design (CAD ) software package. Solid modelers, such as pro/ ENGINEER, tend to represent 3 -D objects more accurately than wire – frame modelers such as AutoCAD, and will therefore yield better results. The designer can use a pre-existing CAD file or may wish to create one expressly for prototyping purposes. This process is identical for all of the RP build techniques.

The various CAD packages use a number of different algorithms to represent solid objects. To establish consistency in the STL (stereolithograpghy, the first Rap technique ) format has been adopted as the standard of the Rapid prototyping industry. The second step, therefore is to convert the CAD file into STL format. This format represents a three-dimensional surface as an assembly of planar triangles, “likes the facets of a cut jewel” .

The file contains the coordinates of the vertices and the direction of the outward normal of each triangle. Because STL files use planner elements, they cannot represent curved surfaces exactly. Increasing the number of triangles improves the approximation, but a th the cost of bigger file size. Large, complicated files require more time to preprocess and build, so the designer must balance accuracy with manageability to produce a useful STL file. Since the STL file format is universal, this process is identical for all of the RP build techniques.

In the third step, a pre-processing programs the STL file to be built. Several programs are available , and most allow the user to adjust the size, location and orientation of the model. Build orientation is important for several reasons. First, properties of rapid prototypes vary from one coordinate direction to another.

For example, prototypes are usually weaker and less accurate in the z (vertical ) direction in the x-y plane. In addition, part orientation partially determines the amount of time required to build the model. Placing the shortest dimension in the z direction reduces the number of layers, thereby shortening build time. The pre-processing software slices the STL model into a number of layers from 0.01 mm to 0.7 mm thick, depending on the build technique.

4. Construct the model through layer by layer:

The fourth step is the actual construction of the part. Using one of several techniques (described in the next section ) RP machines build one layer at a time from polymers, paper or powdered metal. Most machines are fairly autonomous, needing the little human intervention.

5. Clean and finish the model :

The final step is post-processing. This involves removing the prototype from the machine and detaching any supports. Prototypes may also require minor, cleaning and surface treatment. Sanding, sealing and/or painting the model will improve its appearance and durability.

Various RP techniques are developed. They can be classified in three main categories, depending on the form of the starting material in the RP process:

In this category, three RP methods will be discussed :

Stereolithography is a type of 3D printing technology used for layer-by-layer creation of models, prototypes, patterns, and production parts using photochemical processes in which light causes chemical monomers and oligomers to cross-link to form polymers.

Stereolithography (SL ) was commercially introduced by 3D system Inc. (Valencia, CA ) in the late 1987 based upon a patented process originally developed by Mr. Charles Hull. Since this was the first RP technique, various system are presently available commercially to industries.

Cubital limited has developed this RP system. In this process, a layer of liquid polymer resin is cured by ultraviolet light. This is accomplished by exposing the layer in a flash or flood manner. The boundary and area for exposure generated by developing a glass Mask plate by electrostatic deposition of black toner by miling to provide a flat support for the next layer. When all layers are complete, the prototype part is washed away to remove the water-soluble wax. Cubital photopolymer resin is completely cured during fabrication of each layer.

Using this technology, the metal droplets can be generated flexibly and controlled precisely. Net-firm manufacturing of components or ingots based on precisely controlled metal droplets is gaining industrial intrest due to the promise of improved component quality resulting from rapid solidification processing and the economic benefits associated with a structural component in one integrated operation.

In this category, two RP methods will be discussed:

Laminated object manufacturing is a lesser-known additive manufacturing process that involves successively layering sheets of build material, bonding them with heat and pressure, and then cutting them into the desired shape with a blade or a carbon laser.

Fused deposition modeling (FDM) is a technology that uses the melt extrusion method to deposit filaments of thermal plastics in a specific pattern. FDM, like 3DP, has a printhead that can move along X and Y axes above a build platform.

Fused Deposition Modeling ( FDM ) is the name of the technology used by Commercial Rapid Prototyping (RP ) systems from stratasys, Inc. ( Minneapolis, MN ). The stratasys systems are primarily targeted for product development terms for use during the conceptual design stage. The system utilizes simple operation. Inert materials and lack of fumes make the FDM process quite compatible with an office environment.

In this categories, three Rapid Prototyping methods will be discussed:

The Selective Laser Sintering (SLS ) system from DTM corporation (Austin, Texas ) builds part layer by layer using a laser to bond powdered material into the desired part shape. In this process, a layer of thermoplastic powder is a spread out. Then using a high power laser beam, the portion needed for the model is melted and cooled. A roller then spreads the next layer and the process is repeated.

The uncentered Powder serves the function of supports for overhanging features. Recently, the process has been extended to produce ceramic and metallic parts. The process requires sintering in a furnace for complete bonding. The process is simple. The range of material is broad. The visual limitation is that the parts are porous and are therefore useful for only a specific Applications.

In this process, a three dimensional object is fabricated by selectively applying binder to thin layers of powder, causing particles of powder to stick together. Each layer is formed by generating a thin coating of powder and then applying binder to it with the ink-jet like mechanism. Layers are formed sequentially and adhere to one another to generate the three dimensional object.

Unwanted droplets of binder are skimmed before reaching the powder by electrically changing them at the nozzle and then deflecting them from the stream by applying a potential to the electrodes located below the nozzle. After all later are formed, the unbonded powder is removed and the part is fired in an oven to cure and strengthen.

This process can be used to fabricate parts in a wide variety of materials, including ceramic, metal, metal- ceramic composite and polymers. The limitations is inadequate surface finish and porosity.

The strength of these technologies lies in the ability to fabricate fully dense metal parts with good metallurgical properties at reasonable speeds. A high power laser is used to melt metal powder supplied coaxially to the focus of the laser beam through a deposition head. A variety of materials can be used such as stainless steel, copper, aluminum etc. Of particular interest are reactive materials such as titanium.

Most systems use powder feedstock. Objects fabricated are near net shape, but generally will require finish machining. They are fully dense with good grain structure, and have properties similar to, or even better than the intrinsic materials. Initial applications are concentrated on the fabrication and repair of injection molding tools and the fabrication of large titanium and other exotic metal parts for aerospace applications.

Rapid prototyping systems can not yet produce parts in a wide range of product, at a fast rate. Nevertheless, an increasing number of applications are taking advantage of additive fabrication and now incorporate parts that are directly made by RP processes. Today, typically these requirements are low-volume items with complex geometries used in high value added applications such as medicine or aerospace.

As materials and technologies have improved, and as the capabilities have become more widely understood, direct manufacturing has become a fast growing area in Rapid Prototyping.

To address a wider range of applications sooner, RP is also often used as the starting point for making conventional fabrication processes faster, cheaper and better. Rapid prototyping is used in two ways to accomplish this: Molds may be directly fabricated by an RP system, or RP-generated parts can used as patterns for fabricating a mold through so-called indirect or secondary processes.

Rapid prototyping is used to model new products at a very fast rate. Jacob has identified the following applications of Rapid Prototyping :

In blue prints and CAD models, the visualizers have some difficulties to correctly identifying some of the features of the product. This is true specifically when the product contains blind holes, complex interior passage ways and compound curve surfaces, etc. Rapid prototyping can detect all the features as the prototype of the final product is available for inspection and appropriate decision making.

Manufacturing engineers and mangers can check up the characteristics such as strain, operational temperature fatigue etc. on fully functional prototype. Thus the product can be verified before it goes to a fully manufacturing cycle.

Once the prototype is made the designer can perform tests on it within the physical limit of the prototype. For example fluid dynamic flow test can be made on a prototype, cured photopolymer material. If a problem is detected during the test the geometry can be modified in the model, a new RP can be built and the same test can be made for its use.

Design Optimization can improve the situation further. RP Technology allows the design to alter the design without any problem. Having achieved an acceptable design through RP Iteration, the designer has the opportunity to attend to optimize the design by changing various parameters of the product and to test, which is the best one.

Once an optimized prototype has been developed by the using any of the methods of RP Technologies, it is important to fabricate a functional test model (FTM). Because this model has not yet been fabricated or tested, it is not known if it will pass the functional test requirements. RP can be used to perform functional test on the FTM. If the test result is satisfactory, tools are pre manufacturing activities start.

I hope you Liked this article on the Rapid prototyping – The complete overview including the definitions, techniques, technologies and applications.